Oops She Did It Again! > The Spear of God

The Spear of God

The Spear of God

Fence sitting is what happens when you are observing. The joke I always remember is that of the elephant sitting on a fence. What time is it? Time to get a new fence. It is about the weight of the creature. But wait is what fence-sitters do. They look at both sides and don`t decide until the decision is made for them. It is like Revelation in the Bible.  Men are refusing Redemption, and God gives Heaven to the good and eternal perdition to the evil. It`s a tradition that angels are upon the Earth that did not fall with Satan; these are zwilare, and they function as `observers`. Effectively, they watch over what is good. If Redemption is possible, the good is Redeemed. If not, the evil are for eternal perdition. It is like a manuscript, saved upon completion.  If you have been good, and then you have been evil, what is good is saved. But everything is possible to God and so the evil aspect, which is an ego personality, is separable from the good ego-personality, and the evil ego-personality shall experience eternal perdition. This is what you do when you sit on the fence. Observe what is good and understand that, if it is good, you want it, and if it is not good you don`t want it.

On this Earth, sex is the issue. Men want to `own the means of production`, which is Woman. `Life, liberty and the pursuit of happiness` is the American Dream` and so Woman, as the producer of everything that is human is `the means of production`, but she does not own herself. When it is understood that she has a penis of her own, men are understandable as a virus. She can produce more woman without men. This is Revelation. The `woman clothed with the sun and with the moon at her feet` is a male (sun) and female (moon) futanar woman that produces a male child that represents a last chance for man`s Redemption. If men do not accept the teachings of Jesus, God is quite capable of making it impossible for a futanar woman to produce a male child and exterminate the virus that is men forever.

Having sat on the fence long enough to perceive the problem, I understand the elephant joke differently:

What time is it when an elephant sits on a fence? 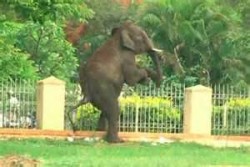 A  good time. No offence.

If we are thinking of man and woman, it`s about which side you favour. Usually, if you are a man, you favour woman and, if you are a woman, you favour man, because of reproduction. If you are futanar, you could invite either to be with you; but Christianity says `two people in a marriage`, which means that Woman wins. She doesn`t need men. The defence has won.

If men do not accept Woman, they can`t be a part of Redemption, which began with Longinus` spear cutting open the side of Jesus upon the cross, Jesus` Ascension to God, and the Paraclete, as Eve, as it were, reemerging from the Virgin Mary - and the Virgin Jesus - as God`s love; the teacher, guide, comforter and helpmeet of mankind.

Men who do not accept Redemption, cannot be saved by the Holy Spirit which, according to Jesus, is the  Shekinah that dwelt in the place where the Ark of the Covenant was kept with the Commandments that Jesus distills as God`s love, and is the Paraclete of the New Testament. Longinus` spear indicates God`s love but the indicator is an instrument of torture – and the man is a torturer – so Jesus is being tortured by Satan, which is what men are - if they do not accept the teachings of the Holy Spirit, which is Woman. That is why Britney Spears – as Woman - represents good teaching; the many Spears of the Paraclete which is omnipresent at, by, and from the side of man until he accepts - or doesn`t accept - Redemption.

Her cover for the single Piece of Me (2007) indicates that there are many parts to her; it is a picture of her as Jesus upon the cross without the spear in her side, so she is the Paraclete but is still on the cross. This means either the spear is not going to appear or men have developed a form of torture that doesn`t require a spear. They have, of course, and they call it a `piece`, which is the gun. `You wanna piece of me?` is Britney`s challenge. You can have the peace of the Holy Spirit and Redemption, which is what she represents as God`s omnipresent Paracletian Spears. Or you are declaring war on her and Woman, and it`s a piece of the cross of Jesus that she represents. The Paraclete is on Earth, but if men do not accept her and try to keep her in torment, she knows she has a penis, doesn`t need men, and can defend herself . 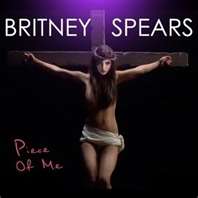 It`s a species war and it`s prefigured in Genesis where God tells the serpent that there shall be `enmity` between it`s `seed` and the woman`s `seed`, which is between men who want to subjugate her, and woman who wants freedom to produce herself without men and with futanar.

Basically, men want to run God. They want to run a man through the woman they are married to, or run a woman through the man she is married to; this is what the Spear of Longinus means in the hands of Christian men; running through Jesus. The Spear of Destiny is the Spear of God, and you cannot run God. The modern day spear is a gun and the evil run people through with it; as a spear. They run women through it, which is `ownership of the means of production` by threats. The American Dream is progress and development in innocence without threat, which is Manifest Destiny. The Spear of God is Redemption as mankind`s Destiny, which is Britney Spears on Mars turning away the American spaceman because she`s happy without him. He represents the threat of ICBMs and Neil Armstrong`s Apollo 11 as future ICBMs on Mars and the spreading of the virus that is men. In her red suit she`s Redemption and the Spears of God who has learned about men. Transylvania had a ruler called Vlad the `Impaler`, and it was his practice to pierce his victims anus with a spear and leave them to die in this way. It`s a form of crucifixion and this is what Longinus` spear indicates. This is what men want to do with their spears, and this is the danger that men represent to Britney Spears. That is why there is no spear of Longinus on the cover of her single Piece Of Me. Men want to put their spear in her, but her appeal is to lesbian `bi` friendships.

Jesus appeals to homoerotic sado-masochists, whereas Britney Spears appeals to men and lesbians. Putting herself on the cross, she is presenting herself as Redeemed, as a Redeemer, and as Redemption if you accept her teaching, which is God`s love. Lesbians need the knowledge of futanar in order to be free and, if Britney Spears is without the knowledge of futanar, she is asking for Redemption while presenting herself as a Redeemer, which is falling into the sado-masochists` trap. Men would want to impale her in order to explain that that is the Spears of God and she`ll never use her penis as a futanar where they cannot see her. That would be Heaven in God, and what the hermaphroditic Adam and Eve were required to learn after they left Paradise: `Male and female he created them both.` (Gen: 1.27) They were One creature in God and the serpent wanted them to know evil. He is alienating woman from man for their future. Britney on the cross is appealing to her Gay devotees, which is a mistake. Because homosexual`s understand anal penetration is what Longinus is wanting to do, which is why Jesus upon the cross is a well known homoerotic image. Britney on the cross is inviting anal sex , which isn`t the path to Redemption. It`s the path to AIDS and death, which is the path of the Antichrist and not the role of the Paraclete when it is in the role of `helpmeet`, or even her other attributes as `teacher, guide and comforter`.

Despite this, she has attained Redemption because, as Jesus says:

`I know your works. Behold, I have set before you an open door, which no one is able to shut. I know that you have but little power, and yet you have kept my word and have not denied my name.` (Rev: 3.8)

Declaring herself `bi` is enough to attract the futanar, and that is knowledge enough. Woman is trained by men in the role of masochist, which means that Britney on the cross is not accepting sadism, but announcing her Redemption and saying `Bi bi`, which is what physically bisexual futanaria is, and she is accepting it and saying goodbye. God has taught through Britney Spears. She has dreamt the American Dream, accepted God`s love, Redemption, and Manifest Destiny. Heaven beckons.