Oops She Did It Again! > Britney Spears: The ASE Award

In the video for Oops I Did It Again Britney Spears` spaceman finds her icon in the sand and there`s a Marsquake. What ensues shows that her scifi has profundity; for example, she`s aware of  `The Association of Space Explorers` Crystal Helmet Planetary Award`: 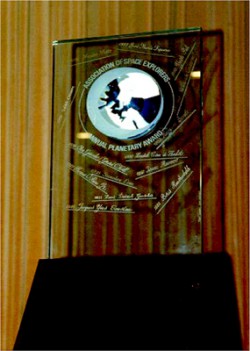 Viewed from the front, the visor reflects the lands and seas on the back, which appear reversed, as they would in an astronaut's faceplate. The sphere is the eye of the astronaut looking back at the Earth, and reflects upon the astronaut`s role as a mirror through which the Earth sees itself and its aspirations. The `reversal` of externals is visible in Britney`s astronaut`s translucent visor as her demesne emerges in the mirror of the eye of his spacesuit.

There`s an international element to the scene. Vladimír Remek (1948-) was a Czechoslovakian Cosmonaut in the Russian space programme and the first non-Russian (or American) in space aboard Soyuz 28 (1978). With the entry of the Czech Republic into the European Union in 2004, he is deemed the first EU spaceman. The Mars spacecraft were part-designed by Hungarian Ferenc Pavlics between 1961 and 1988 and `remek` in Hungarian means `thumb`, so Britney`s descent in a giant`s ring is symbolic of her knowledge of space exploration, and love for science fiction: one small step for a woman, one giant leap forward for womankind.2

Britney`s heart is clearly with scifi and space exploration, and she`s playing a Valentine`s ASE card in Oops I Did It Again. When her spaceman gives her his gift, she says: `But I thought the old lady dropped it into the ocean at the end.` The allusion is to the Titanic movie in which Rose drops the blue jewel, `the heart of the ocean` into the sea in lamentation over her lost love who drowned in the `disaster` when the great ship sank on its maiden voyage. Valentine Tereshkova, a Russian Cosmonaut, was the first woman in space in 1963, and Britney`s the first woman on Mars in Oops I Did It Again in 2000.

The heart`s symbol is the `Holy Grail`, the cup or bowl, and Britney`s ring is her superbowl ring, that is, the `Last Supper` bowl ring, because the Grail was the bowl from which Jesus Christ offered his `body and blood` to the disciples in the form of the `bread and the wine` before his crucifixion. Britney`s ring is Christian, and for her friends wherever they may be upon the Earth. Her Grail ring is a symbol of le table ronde at which her friends may sit, drink and eat with her without fear; as the Knights and Ladies of the Round Table of the legendary King Arthur of the Britons were wont to do.

Valentine Tershkova is highly regarded because of the tines of the fork that appear beside Britney`s spaceman, as he hangs suspended above her as she lies on a white tablecloth. Elsewhere Britney Valentine is surrounded by the claws of a Russian bear, and she`s happy to be with a friend. In the tale of Rose Red and Rose White a `little man` is evil towards the two girls, and a bear kills him. In Oops I Did It Again Britney appears as Rose Red, in her red pilot`s suit, and as Rose White on the white tablecloth. Surrounded by bears` claws, she`s grateful to her rescuer, and doesn`t care which country he`s from.

2 The first man to set foot on the moon in 1969 was Apollo 11`s Neil Armstrong: `One small step for a man. One giant leap for mankind.`