Oops She Did It Again! > Body Of Work

Christianity confuses the body with the `body of work`. Britney Spears (1982-) on the cross represents the Paraclete; teacher, guide, comforter and helpmeet. Just as Eve was from Adam`s side, so the Holy Spirit was given to the Earth after Jesus` Ascension and Longinus` spear cutting open his side represents her emergence.

This is the `body of work` in Redemption. That is why she is Britney Spears. Woman is `God`s love` (Luke 10.27), as defined by Jesus. Because the Paraclete is the Holy Spirit. Being Civilized is different from Civilization. Civilizing is a process. Mainly it consists of people being told to wear clothes, and there is a correlation between disease and clothes. Many peoples of the world died of the pox because they didn`t wear clothes. They had come into contact with European settlers during Earth`s period of Colonialism. AIDS is understandable as a disease for people who wear clothes and don`t want innocent people to remove theirs.

It is God`s Revelation. `Life, liberty, and the pursuit of happiness` is the American Dream and Manifest Destiny, which is innocent development and progress under threat but protected, or without threat having been successfully protected. Essentially, the body is an innocent `piece of work`, and is God`s `body of work`, and in Eden Adam and Eve saw that they were `naked` after the serpent gave them the `fruit of the tree of the Knowledge of Good and Evil` (Gen: 2.9).

In the 20th Century - and before - men have perceived Woman`s body as something to hide, whereas Woman`s body is God`s good. That is why God gave `God`s love` to Adam. This is the meaning of the tree of Good and Evil. Men are the `seed` of the `serpent`, which is told there shall be `enmity` between it`s `seed` and `the woman`s` (Gen: 3.15). Clearly the woman has `seed`, which is her own penis. Men don`t want her to know that she has one, so they present her as a `piece of work` rather than the `body of work` she represents, which is Civilization entire – herself as Producer and Product.

Woman`s `body` is the `body of work` of the Creator. Men`s wars are wars against her. They are the red dragon of Revelation, which lies waiting to devour the child born to the `woman clothed with the sun and with the moon at her feet`, who is to `rule the nations with an iron scepter` (Rev: 12. 1-18). He is God`s law, and Jesus` distillation of God`s Commandments is `God`s love`. He enforces the work of Redemption, which is the `body of work` that is Woman and her Product – Civilization.

Innocence and the body mean Civilization, because it`s God`s `body of work`, so presenting woman as evil because of her body is the work of the serpent. The dragon of Revelation is the serpent fully grown and it waits to devour the woman`s child – her product – because that is what war is. Men devour the woman and that`s what she` for – to the Evil One - murdering.

Jesus` Redemption is God`s `body of work`, but the crucifixion is not Jesus` teaching. That is why Britney Spears on the cross isn`t her teaching either. Her `body of work` is God`s work of Redemption, because she`s Woman. It is the Word of God translated into the Work of God by the Holy Spirit, which Britney Spears represents. The Paraclete emergent from Longinus` spear`s cutting open of Jesus`s side (1 John: 2.1), and which tutors the American Dream to it`s fulfilment as Manifest Destiny.

In effect, men only want Woman to wear clothes because they want to devour her politely.

Civilization is clothes, and clothes mean `eat later`. She is allowed innocence, progress and development, then it`s threat and war. She`s devoured and her product – Civilization - which is her `clothing`, is wasted.

In fact the picturization of the dragon in Revelation means that men want cannibalism, which is why Eve is naked in Eden and, after the serpent tempts her, she and Adam perceive they are naked. Bible scholars assume it`s a sexual theme, but it`s the desire to eat meat rather than fruit. Civilization is the attempt to produce a product that men can`t eat. Because it can take care of itself. This is what Woman with a penis is. She doesn`t need men and can produce her own product – Civilization – without being devoured. 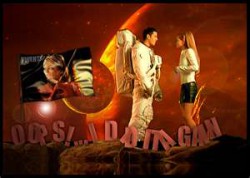 Men are obsessed with Woman`s nude body because they want to murder her as an innocent. Britney Spears, in Oops I Did It Again (2000) says: `I`m not that innocent.` She wears a red suit. She is Redemption and refuses the American astronaut admittance to her domain. She is her `body of work` and her body is her Civilization.

Jesus` birth and Ascension are a single event in eternity, which means that Adam and Eve`s birth are an eternalized event, that is, Redemption is Eternal Salvation, which is the `body of work` that they have created as Civilization. In other words, the Devourer that is men is unable to devour her `body` if she accepts Redemption. Woman`s body is her `body of work` - literally. That is why Mary is a Virgin and goes to God in her Assumption, because God has assumed her form since Eden and in the person of Jesus. She is assumed by God - assumed as part of God, that is. That`s why Britney Spears` cover for the single Piece Of Me presents her on the cross: to remind us that the Paraclete is the Woman from Jesus` side and is God`s. Jesus` works are saved and so are the works of those that accept Redemption.

Essentially, nudity is the art of `love-making`, which is what the artist or Creator – Woman as the Producer of her Product – does: she love`s making. Love-making is her art. Good art is the art of making love or the love of making, which is God`s love. Being `saved` doesn`t consist in being a virgin but having a `body of work` which, in effect, is the woman`s `body`, that is, she shouldn`t be ashamed of her work because she uses her body. Redemption means her `body` is saved and her `body of work`, which means that pornography is saved because it`s hers.

Pornography is both making love as art and the love of making. Because the woman`s body is beautiful and she has made it. The dilemma is that men want to `own the means of production` - and devour it. This is why God has created futanar. So that Woman with a penis can have Redemption and not be devoured by men, which is what the red dragon of Revelation means. If men do not accept Redemption, they shall have eternal perdition because woman`s `seed` from her penis shall be productive only of woman – and men only want to harm her.

When a woman has her hymen broken by a man`s `spear`, it`s a corruption of her innocence, that is, Longinus` spear is a metaphor for Jesus` innocence being broken and the woman from his side, the Paraclete, who has preached God`s love through him, being put into service in order to work for man`s Redemption. In other words, Woman is God`s love and Redeemed because originally innocent and not sinful. Men`s sinfulness resides in their desire to break. That is why it is the Holy Spirit because it is God`s Spirit and men want to break her.

This is why it is against God`s Commandments to `steal` because it is `breaking into` someone`s life, and `adultery` is the same. All of the Commandments can be interpreted in this way, or as exhortations to remember God`s love; for example, `remembering the Sabbath`, and refraining from `blasphemy` (Matt: 22.39). Taking a life is a `breaking into` insofar as the flesh must be penetrated violently: `speared`, as it were. Longinus` spear forces a Caesarean birth of the Paraclete or Holy Spirit, which is the Spear of Destiny as fulfilment of the American Dream and Manifest Destiny. Britney Spears represents enough penetration, because her name is a dilution of the desire to devour, accept penetration by the penis, and Produce God`s Product.

Redemption is the acceptance of God`s Product, which is God`s love, and not any other form of penetration of Woman that does not produce God`s product, which is love-making or the love of making. Unmaking is AIDS or bullets. One is slower and the other is faster. But the simple reality is God`s law:

This is a biblical plague in Revelation, which would correspond to AIDS and the sterility it produces, that is, death. Bullets are quicker, but they are the result of penetration which is designed to kill God`s product. Men are the devourers of it, and it is not serendipitous that medical researchers believe that AIDS was originally communicated to humans by those who ate the brains of monkeys: to eat them they had to kill them. The connection is penetration. Sodom was destroyed in the Bible by God because of sodomy (Gen: 18,19), which is against God`s explicit intention. Some perceive it as an event similar to Hiroshima, which left a hole in the ground. Effectively, it`s the decision that the target is a sterile asshole before you hit it, which is what murderers do. Consequently, they are sodomites, that is, anal sex is a contagion of which AIDS is a concrete metaphor – like Sodom.