Oops She Did It Again! > Mars` Barbarella, Jane Fonda and Britney Spears` Oops I Did It Again: The Washing Machine and The Camera

Mars` Barbarella, Jane Fonda and Britney Spears` Oops I Did It Again: The Washing Machine and The Camera

Mars` Barbarella, Jane Fonda and Britney Spears` Oops I Did It Again: The Washing Machine and The Camera 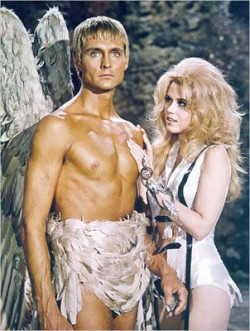 The opening credits of Barbarella (1968) starring Jane Fonda (1937-) are of a spaceship`s porthole, and the camera moves inside to observe her while she spins in weightlessness and removes her clothes sexily until she`s nude. After the movie Jane was very careful in choosing her roles because she feared to be typecast as a pornstar. In other words, Jane Fonda wanted to be taken seriously. Britney Spears (1982-), on the other hand, in the video for her pop single Oops I Did It Again (1999), tells the spaceman`s camera suspended above her, `I`m not that serious.` In her red pilot`s suit she`s placed a hook into his backpack and,  raising him until he`s suspended above, by the `miracle` of the camera technology attached to the astronaut`s spacehelmet, Britney`s now discovered in a white bikini dress underneath him.

Neither Jane Fonda nor Britney Spears would accept the definition `pornstar`, but either of them would be prepared to admit that the `body beautiful` contributed to their career. In Barbarella Jane Fonda represents the zenith of technological aspiration and achievement, which is the woman who has her own spaceship. Although the Apollo space programme was criticized for expense, its development of the technology to produce a washing machine as a labour saving device to free women from drudgery can`t be overestimated. In effect, the camera watching Jane through the porthole of the spaceship, as she removes her clothes, is depicting woman`s need for a washing machine, which NASA`s Apollo space program fulfilled. 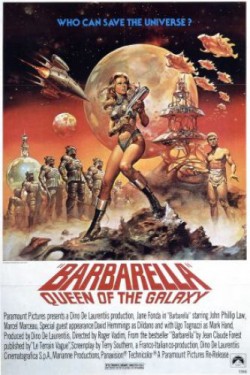 According to Revelation, `woman`s seed` receives a `new heaven and Earth` from God while the `serpent`s seed` receive perdition as a punishment. Effectively, for stalling the NASA space program`s technological valence so that women remained happy with a `Space Age` automated washing machine rather than a machine that took care of them, that is, a robot.  21st century internet technology reveals that `woman`s seed` isn`t a euphemism. Women have a penis of their own and are called `futanarian`. Consequently, the `serpent`s seed`, that is, men who have denied women a machine to care for `woman`s seed`, receive eternal unendurable pain from God as a punishment for keeping the human species on a low level of technological development so that she will remain a slave.

In Oops I Did It Again Britney Spears is `twinned`. She hooks her spaceman and raises him until his camera eye is looking down upon her in a white bikini dress. Although the audience can`t see her penis, the `twinning` of her suggests the biblical socio-economic valence of `woman`s seed`. In her red pilot`s suit, Britney`s allusion is to the cancellation of the X-15 `spaceplane` program of NASA`s, which would have afforded women the opportunity to pilot themselves to the moon. Whereas Neil Armstong`s 1969 fulfillment of NASA`s Apollo space program as the first man on the moon, `One small step for a man, one giant leap for mankind,` represents woman`s imprisonment by the `serpent`s seed`, which doesn`t want an advanced technology that would allow `woman`s seed` to escape. 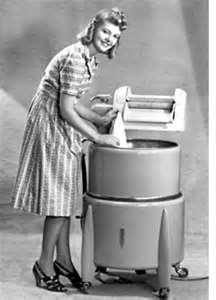 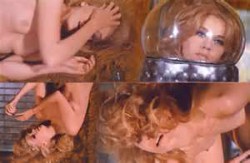 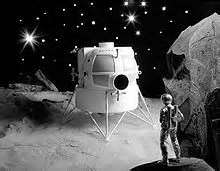 Descending inside a giant`s ring in Oops I Did It Again, Britney is `One small step for a woman, one giant leap for humanity,`where `woman`s seed` is the human species, and she`s conquered Mars, the god of war. In the New Testament Jesus is the `woman`s seed` because he was born from the Virgin Mary without contamination by male semen, that is, the Virgin Mary is a prefiguration of `futanarian` woman with her own penis and reproductive valence, while Jesus` teachings of Redemption represent the simple observation that, unless mankind accepts `woman`s seed` as the human species, and ceases being a parasite emerging from her `host` womb to enslave and devour her in its periodic wars against art, culture and civilization, it`s perdition.

Just as Jane Fonda`s stripping in weightlessness seen through the porthole of the spaceship represents the invention of the labour saving washing machine in the 20th century, which is a symbol of women`s almost freedom, so Britney Spears` spaceman`s camera is a depiction of her almost independence from men. In Judaism `Meshiah` is the word for Christ, and the adjective is `Meshiahn`, which is pronounced `machine` because Jesus is the `Word` and the `Logos`, who advocates technological development through acceptance of the Holy Spirit/Paraclete, that is, the transformation of sexual instinct into intellectual capability. 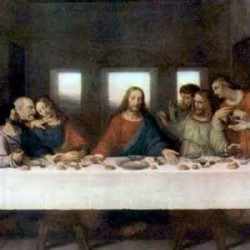 The Catholic Communion represents Jesus` offer of `bread and wine`, as symbols of his `body and blood`, to his followers in fellowship. In the Catholic service the `bread and wine` are a `transubstantiation` symbol representing the transformation of the soul and the spirit through the valence of libidic energy. However, the human desire for God and heaven is appropriated by the enslaver. Jesus` supposed celibacy is the rationale for depriving humans of their sexual valence, and so `woman`s seed` is given a `new heaven and Earth` by God. Because men have denied her penis` socio-economic power, that is, the freedom to develop a technology of liberation through libidic transformation of her own penis` strength. 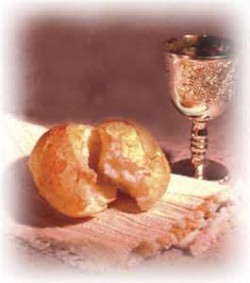 The machinery of enslavement is most easily recognizable from ancient Greece where the homosexual pederasts enslaved the `host` wombs of women to make war and spread their contagion, which in the 21st century had become the `biological warfare` against `woman`s seed` of HIV/AIDS. The Greeks employed the device of the huge hollow wooden `Greek horse` to hide inside before the walls of the city of Troy and be accepted in by the Trojans, which is the device employed by the 9/11 Al Qaeda terrorists who hijacked `civil` aircraft to crash them into the Twin Towers of New York`s World Trade Centre in 2001. The aim was to reestablish the `rough trade` of homosexual pederasty`s contagion of war against `woman`s seed`. Jesus` advocacy of acceptance of the Holy Spirit/Paraclete rather than the `gay plague` would have saved Troy, and perhaps the USA wouldn`t have given the 3rd largest army in the world to Hollywood`s `moustache`, the bandido of Babylon, macho Saddam Hussein. 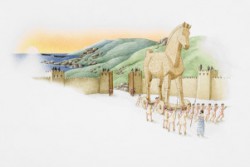 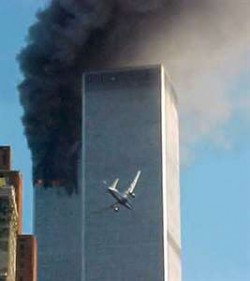 Although Jane Fonda in Barbarella and Britney Spears on Mars in Oops I Did It Again don`t seem to be serious science fiction, they`re primeval in terms of human development, which means that less is more. In director Stanley Kubrick`s movie version of Arthur C. Clarke`s 2001: A Space Odyssey (1968) a chimp throws an animal bone into the air that it has just used to kill and, by the `miracle` of camera technology, the bone is transformed into a space vessel, while the socio-economic valence of humankind is defined as murder. However, Jane Fonda`s stripping off of her clothes while the camera observes her `spinning` weightlessly through the porthole of her spaceship in Barbarella redefines the best technology in terms of the `washing machine`. She`s not concerned with her clothes. 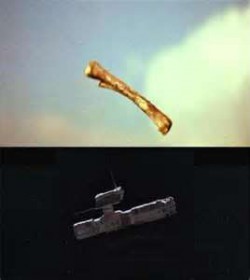 In Oops I Did It Again Britney Spears` `camera` is the spaceman she hooks up above her so that she can be filmed. The weight of the contents of the `washing machine`, which corresponds to the astronaut`s journey inside the `Mars lander`, that is, Mars` laundry, isn`t an issue. Britney Spears` wait to take her clothes off depends on the `watching machine`. In the movie Sliver a terrorist uses surveillance cameras inside Sharon Stone`s building to stalk her, while 9/11 `live on CNN` was written by the terrorists who were its `stars`.  Hollywood, Babylon`s `leading men`, were Saddam Hussein`s and Osama Ben Ladan`s Al Qaeda, which constitute Hollywood`s `dirty laundry`. 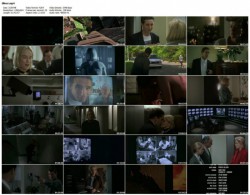 The 9/11 `movie` was encouraged by the audience`s increasingly insatiable desire for sensationalism fed on a diet of blood and gore since the inception of cinema at the end of the 19th century. However, being safe and nude is what `watching machines` are for. Although Britney Spears isn`t watching Mars` laundry in public in Oops I Did It Again, she`s critical of wars which won`t allow her to feel safe. Jane Fonda`s stripping in safety in Barbarella conceives of the `washing machine` as essential to woman`s liberation, while Britney Spears` observation is that the `watching machine` is essential to the maintaining of `Liberty`, that is, the machine that washes her clothes and watches over her is `Meshiahn`. Because it`s program`s human.