Oops She Did It Again! > Britney Spears` Oops I Did It Again, Supermarionation, and Thunderbirds

Britney Spears` Oops I Did It Again, Supermarionation, and Thunderbirds

Britney Spears` Oops I Did It Again, Supermarionation, and Thunderbirds

Descending onto her stage set in Oops I Did It Again Britney Spears` science fiction pop extravaganza pays homage to the British `puppet` series Thunderbirds, created by Gerry and Sylvia Andersen in the 60s. Made into a Hollywood film starring Vanessa Hudgens and directed by Star Trek`s Will Ryker, Jonathan Frakis, in 2004, Thunderbirds featured `International Rescue` and a cast of puppets with strings often visible as they captured the hearts and minds of a generation of kiddies. Appearing in the kids` comic TV 21, the Thunderbirds cast were closer in conception to the movie version because the characters appeared better drawn without signs of a `puppeteer`. One of the more obvious `scenes` resembling Thunderbirds of `Tracey Island` is that in which Britney gesticulates and the male dancers collapse around her like the palm trees collapsing around Thunderbird 2`s `take off ramp` as it prepares to leave on a `mission` for `International Rescue`. 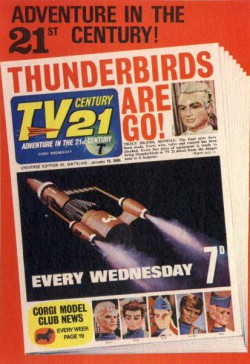 Britney, in her red pilot`s suit, is depicting Thunderbird 3 too, which is a bright red spaceship, while her appearance also alludes to the bright red nose cone of Thunderbird 1. Raising her spaceman visitor, who has arrived from Earth, he dangles helplessly above her as she takes the role of the `puppeteer`. Below the spaceman Britney appears in a white bikini dress, and so the spaceman `hovers` above her like Thunderbird 2. 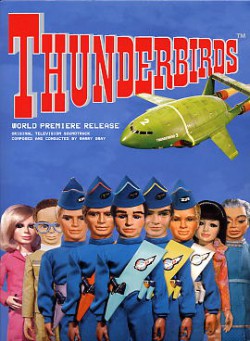 Britney`s Oops I Did It Again `scifi` is referring to the novel The Puppet Masters by the USA`s first `Grand Master` of science fiction, Robert A. Heinlein (1907-88), in which `slugs` take over the bodies of the people of Earth and can only be perceived if the people are naked. Many critics have thought the `slugs` refer to the USA`s 50 `s fears of `communism`, which often transpired as aliens in the movies of the period and appears in a later 1959 Heinlein juvenile novel as the `bugs`. Starship Troopers was made into a movie in 1997, and Podkayne Of Mars is Heinlein`s  juvenile girls` novel that Britney`s alluding to when she suspends her spaceman above her like Thunderbird 2. 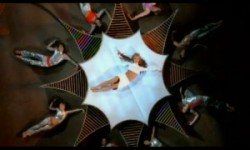 If women have a penis of their own, as futanarian women do ( https://www.futanaria.com ), it would only be possible to see that they were a part of the species of woman if they were naked. According to the Bible there will be perpetual `enmity` between the serpent`s `seed` and that of the woman`s `seed` and war in heaven, which her `seed` will win. Because `seed` is semen the woman described as `hidden` has a penis of her own and is the true species of the planet Earth. 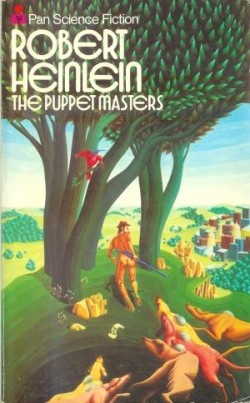 The aliens are men because `slugs` is the word used to describe bullets and `shots` of alcohol, which denote the method applied to those who are conscious, or capable of awakening to the fact that the people on the planet Earth are murdered if they show signs of intelligent life, or are `dumbed down` by means of the fake attractions of alcohol poisoning. 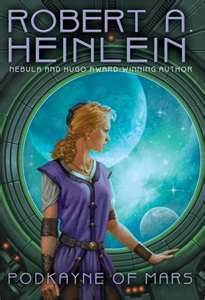 `According to the developmental depth psychology of Carl Gustav Jung (1875-1961) the collective consciousness of mankind functions at such a low level that it corresponds to what Jung terms the subconscious or collective shadow that functions much in the way that Heinlein envisions the `slugs` as functioning in The Puppet Masters. Britney`s perception is that woman as a species with her own penis can`t be free because of the collective shadow of the alien subconscious of men possessing her as a female collective unconscious of its role as `host` womb to the parasite, and based on unconscious acceptance of the male alien seeking symbiotic relations:

`... the embryo ... obtains nourishment from the blood of the mother, similar to the leech, which feeds on the blood of others.`1

The `blood plague` of the `red dragon` of Revelation corresponds to the HIV/AIDS virus which became virulent in the last quarter of the 20th century as an incurable `killer disease` that functioned as a form of men`s biological warfare against women`s `host` wombs. As a parasite men function as the HIV/AIDS virus does insofar as it `feigns friendship` for the woman in order to infect her with its parasitical alien life form, or `slug` as Heinlein refers to it in The Puppet Masters. The `slug` might be interpreted as a euphemism for the penis that isn`t sexually interested in the woman. 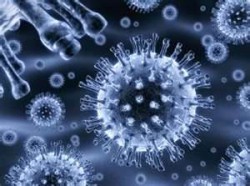 Western civilization began in ancient Greece with a society that wasn`t sexually interested in women at all but promoted the spread of its homosexual pederasty by means of the enslaving of women`s wombs through devouring wars against her, which is what the `red dragon` of Revelation represents, and its `blood plague` is its continuation of war against her in the form of HIV/AIDS` biological warfare  against her daughters. 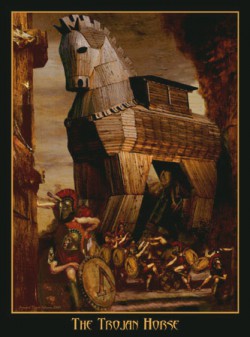 Against Troy the Greeks employed a huge wooden horse inside which they hid and, when the Trojans, believing the horse to be a `friendship gift`, took it into the city, the Greeks emerged to enslave the wombs of the women for homosexual pederasty. On 9/11 the Arabian terrorists similarly `feigned friendship`, like the HIV/AIDS virus, when boarding a flight from Boston, Massachussetts, and crashed the hijacked planes into the Twin Towers of New York to spread homosexual pederasty`s contagion of terrorism and war further. 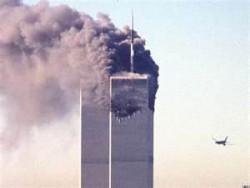 In Oops I Did It Again Britney focuses on Thunderbirds as an `International Rescue` force, with the main emphasis on herself in a white bikini dress as Thunderbird 4`s `pod` because of her referencing `Poddy` from Heinlein`s Podkayne Of Mars, but she`s also referring to the `pods` from the 50`s movie The Invasion Of The Body Snatchers, where `Poddy` would be the `body` to be `snatched`. In other words, it`s difficult to see the difference between an alien and a human if you`ve been taught that men are human and they`re aliens. 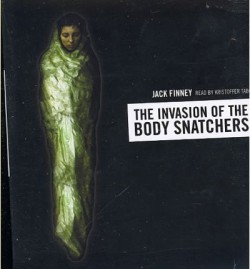 Although Britney`s spaceman appears to be alone we are given glimpses of `Mission Control`. Her spaceman has a camera fixed to the side of his space helmet, and we see `Mission Control` observing Britney through its lens from inside a `control centre`, which corresponds to Thunderbird 5, the `Space Station` of the Thunderbirds TV series and the research and surveillance technology Britney needs in order to `unmask` the aliens. 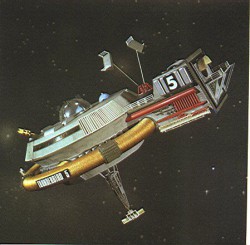 Thunderbird 5 appears to be in the hands of the `aliens`, because the personnel of `Mission Control` are males. Although the suggestion is `Mission Control` is on Earth, Britney`s suspension of the spaceman above her `Poddy` suggests that he`s Thunderbird 5, the `Space Station`, and that there are `aliens` inside him, which correspond to `demons`, who constitute the equivalent of a hijacking of Air Force One, which is the plane of the President of the USA, by terrorists seeking to spread their plague. 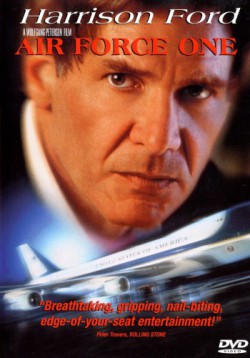 In Revelation the `woman clothed with the sun and with the moon at her feet` gives birth to the `New Redeemer` while the `red dragon` waits in vain to devour the child. In Oops I Did It Again Britney, in her red pilot`s suit, corresponds to Redemption, because she`s mothering, and that`s why she descends inside a giant`s ring at the beginning of the video. The spaceman is being taught Redemption, because the `New Redeemer` protects the woman after she`s given birth, which is why the spaceman corresponds to her `deliverer`. 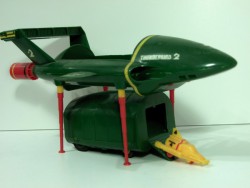 `Beware Greeks bearing gifts` is an adage deriving from the Trojans` experience of the Greek gift of the wooden horse at Troy that the Greeks emerged from once it was inside the city so that they could enslave the wombs of the women within for homosexual pederasty and the spreading of its plague through warfare:

`But I thought the old lady dropped it into the ocean in the end?` 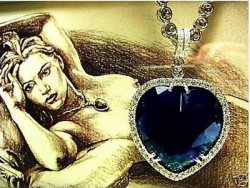 Britney`s alluding to the `heart of the ocean`, a blue diamond that the heroine of the Titanic (1997) movie dropped into the sea at the film`s ending in memory of her love who`d lost his life helping others into the lifeboats when the ship, the Titanic, hit an iceberg and sank on its maiden voyage to the USA from Liverpool, England, in 1911. Because Thunderbird 1 is blue, and it`s an Earth rocket, which `International Rescue` use to respond quickly to disaster situations on the Earth, the blue diamond, or `heart of the ocean` and Britney, in her red pilot`s suit`, symbolize the blue rocket and the red nose cone. 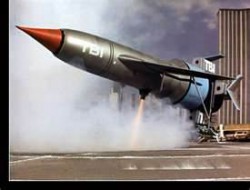 According to Jung individual development, or self-actualization, depends upon conscious differentiation of the four functions of consciousness, and the `Thinking` and `Sensation` function in man is associated with the ego. Britney`s perception is that `demons` are occluding `Thinking`  and `Sensation`, that is, the ears and eyes, so that the individual can`t progress towards self-knowledge and wisdom because he can`t differentiate the functions of `Feeling` and `Intuition` by means of the ego, and these functions are associated with the soul or anima, which is the mediator of unconscious contents of the `Self` struggling to become conscious, according to Jungian psychology. Consequently, the `blue diamond`, as a symbol of the unconscious `Self`, is the `heart of the ocean` because, in Jungian psychology, the ocean is a symbol of the unconscious from which the archetypes emerge as impulses to development or individuation.

`Your toxic gun slipping under.`

Her super heroine is pictured breaking into a top secret laboratory in order to steal a phial of liquid, and the suggestion is that a cure for HIV/AIDS has been kept from the public. Because the parasitical aliens of the Earth want to improve their biological warfare against the `host` wombs of women to make it gender specific against her. Britney perceives that the `blue heart` and the `red nose` of Thunderbird 1 belong together. Because, although sex might be fun, HIV/AIDS isn`t funny to her.

Because the ego is associated with the spirit, religion is a `game` in which the faithful believe in their hearts and have intimations of heaven, while the `demons` occlude their ability to think and hear. It`s a `game` because the `demons` correspond to those who want neither men to develop, or women to have knowledge of their own penis, and so awareness of themselves as a species. Either scenario threatens to expose the aliens` striving to achieve and maintain global hegemony.